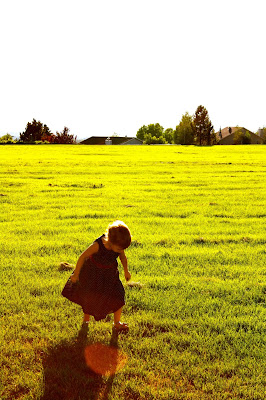 Henrietta, in a field by my parents' house, doing her funny little slumped-shouldered, overwhelmed run.  Last night, as Sam and I put Henrietta to bed, I noticed a pair of silky, light-purple pajama pants on Henrietta's floor. They were handmedowns from cousins, which I had sorted out of her dresser the other day because the elastic waist was shot, and I thought, picking them up to find a place for them, "I should just throw these out." And my next thought, sponsored by the mean, Pinterest-saturated voice in my head was, "Throw them out?! Are you kidding me? How shamefully wasteful. You really ought to turn them into a pretty little purse for her. Yes, yes, that's it, sew the fabric into a pretty little purse. She'll love it forever. You say you don't have time? Absurd. Sewing them into a purse is really the proper use of resources and time. Just make time for it. It's important. You have to. It won't take long. If you care at all about
6 comments
Read more 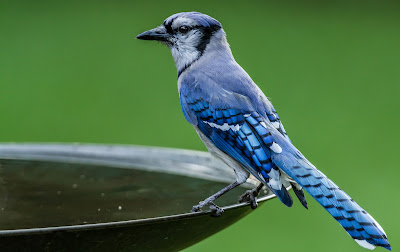 Photo Source.   (We didn't take a single photo. It seemed like taking a picture of a holy moment, or a car accident. So here is a blue jay who is not ours, but is also lovely.) We recently watched our neighbors--a nice retired couple with chickens and a gorgeous garden--build an elaborate net structure around their bushes to keep birds and squirrels out. It was like a room for their blueberries, made of net. Since then I've seen birds fly into it, glancing off one way or another as the netting pushed back.  But last evening, as Henrietta and I hung out in the backyard while Sam finished dinner, I realized the bird by the blueberries didn't fly away, though he tried. And then I realized he was somehow inside the structure, flying against it from the inside again and again, getting more frantic each time.  "Birdie stuck?" Henrietta asked.  "Birdie stuck," I said. "Let's go tell Hank and Linda." I carried her on my hip an
6 comments
Read more 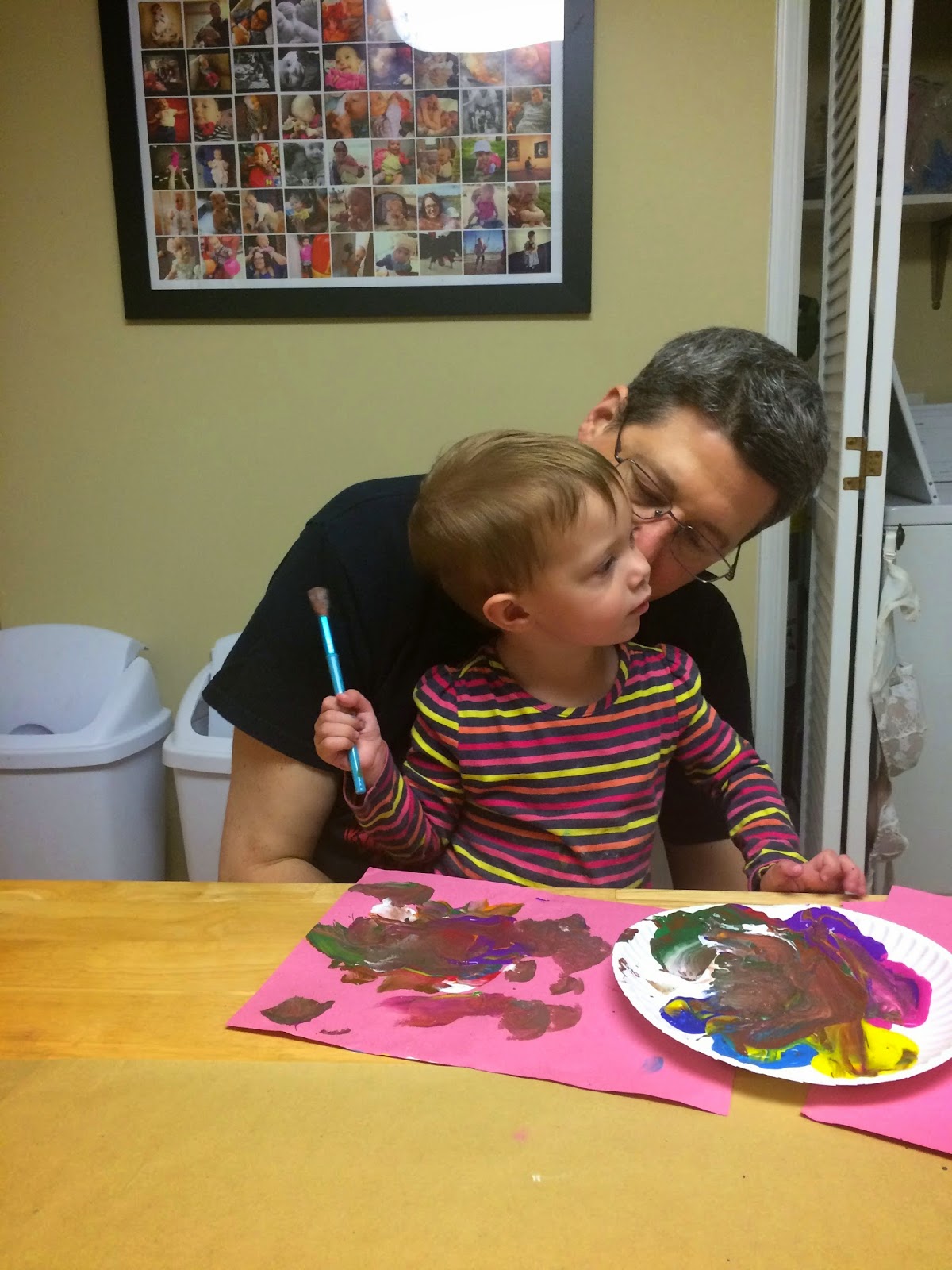 [First I want to say that I was overwhelmed by your kind responses to my last post. Really, thank you so much for your kindness. That meant the world to me. I continue to feel better, though it's not a straight trajectory by any means. As one of my teachers used to say, We live in hope.] Sam with the Artist Henrietta has taken up painting. And coloring. And, just, making things in general. This is exciting, since I've basically been waiting for it since she was born. At three months, I helped her make her first work of art for her dad for Father's Day, but I confess it made her cry. And ever since I've been waiting, waiting, watching other kids her age get into it and trying not to compare. But I totally compared; let's be honest. And she was much more interested in putting the crayons in and out of the box than actually using them, and this made me feel a little panicky. Painting is An Energetic Dance So when she suddenly started saying, "Paint!
5 comments
Read more

- December 31, 2014
Last night I cleaned out our fridge, a task I've been dreading and avoiding for some time, which made it particularly daunting. I moved swiftly, trying not to think, shoving shriveled red and orange peppers into a garbage bag. I I shoved a package of pale ground turkey and a clamshell of already-cut and now softening butternut squash in the bag, too. It felt late at night, though it was only eight. Henrietta was winding down, and I was sweaty from cleaning my kitchen while dancing and listening to Taylor Swift. The energy I had begun with had gone, and the mean voice in my head began to turn on me. What a shameful waste of money , the voice said. Look at this nearly full garbage bag full of rotten food! What a failure you are, what a loser. Who do you think you're kidding? I stood up and shook my head. ** Just after the end of classes, about a month ago, I entered the deepest bout of depression I've ever experienced. I don't know how much I'll end up sayin
11 comments
Read more

I Died for Beauty, and It Was the Beauty of My Dreams 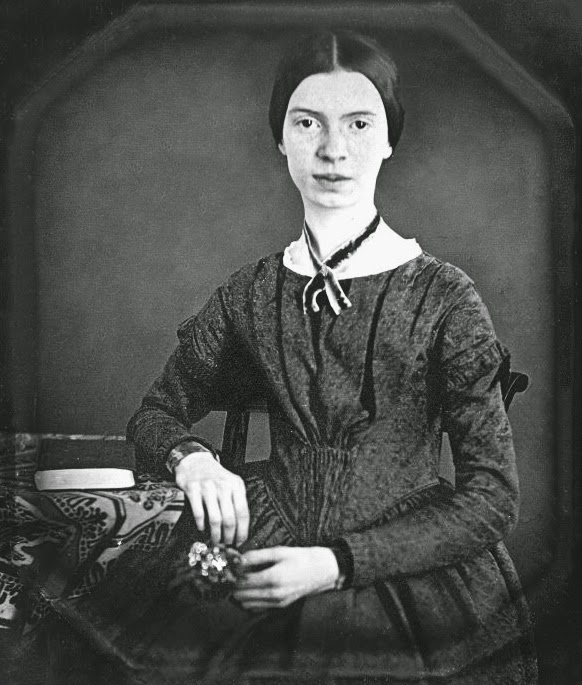 Emily Dickinson, who may have been amused, but probably not. Eleanor Roosevelt, who I do not think would have been amused. Yesterday I was teaching Emily Dickinson's poetry. I was so excited to be teaching Emily Dickinson's poetry that I felt like dancing right up at the front of the class. I had inadvertently assigned five creepy poems about death (which is easy to do when you're assigning Dickinson), but it didn't even matter because she's so awesome and I love her and I want to be her when I grow up and I think she had one of the most bizarre and most brilliant minds that has ever graced this planet.  We were talking about this poem , which begins "I died for beauty, but was scarce / Adjusted in the tomb, / When one who died for truth was lain / In the adjoining room." But when I went to read to it to the class, I accidentally said, "I died for booty." And then I couldn't stop laughing. I leaned over the podium, gripping the
5 comments
Read more 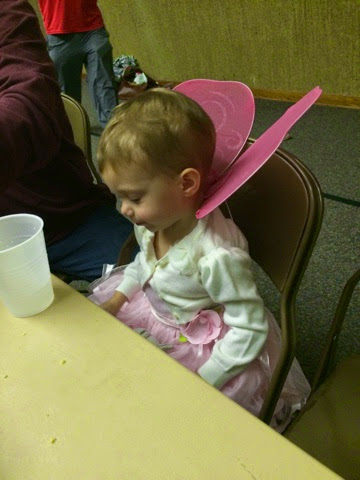 Her adorable lamb costume finally arrived in the mail at five this afternoon. The party was at six.  I tried to put it on her and she screamed and writhed, as I somehow knew she would. Long before today I tried to decide what she would be for Halloween, but I kept imagining her tugging at whatever I put on and saying "No like it!" It was sort of like that, only she just screamed and writhed on the floor.  So I abandoned the lamb and put on her pinkest, fluffiest dress. I thought about how grateful I was to the Target dollar bins for these wings I bought months ago. I told my inner feminist tough beans, and I called her a fairy princess.  This was the only picture I took, and it's not great.  I felt terrible as we left home for the church party. I felt spread too thin and not nearly creative enough as a mom. I felt so tired.  Luckily, a fabulous Halloween takes so very little when you're two. I'm pretty sure this was the best night of her life. At first she was con
8 comments
Read more

- October 27, 2014
Henrietta no longer believes in bedtime. She believes in fighting with every tool available to her until she falls asleep on the couch, watching Scooby Doo  (known in this house as "Dooby") at way too late an hour. I'm not a big fan of this development, but we go through phases like this now and then, and things ought to change soon.   Until then, we're exhausted. Sam usually volunteers to stay up with her, but it's his turn to sleep. So it's 9:36, and I've been grading papers, and we've been eating popcorn, and she's been practicing reacting to the scary parts. She runs to the couch, looking behind her frantically, gasping, and saying, "Oh no!"  And now I'm done grading papers, and her head is on a couch pillow, and we're watching The Wizard of Oz, and she's practicing saying "witch" and I'm suddenly so happy to be sitting by her that I can hardly stand it.  "Wish!" she says.   "W
3 comments
Read more
More posts

Deja
I'm a writer, a sassy Mormon, and passionate about the following: quilting, thrifting, cookies, walks, fluffy pillows, Mexican food, poetry, libraries, Fiona Apple, dresses, singing made-up songs, London, green smoothies, Project Runway, learning, thinking, the beach, cats, babies, you get the idea. I'm married to Sam, a writer and (sometimes) Catholic whose job is to make me laugh, and he does it well. We live north of Boston and are raising three cats and Miss Henrietta Plum, the baby who changed everything.